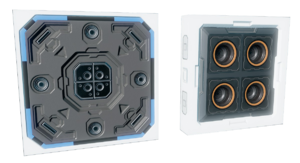 Hardpoints are used for mounting a large portion of devices, including thrusters, weapons and tools.
Hardpoints are available in three shapes: small, large and large corner, there is no diference in functionality between the sizes.
Hardpoints have conections for cable/pipe on their back side, and a mounting conection for devices on the front. 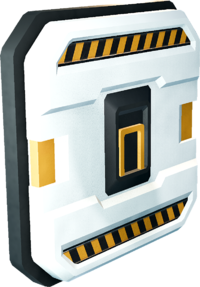 The Cargo beam device emits a laser which locks onto any object on its trajectory.
The cargo beam device is most commonly used in spaceships designed for cargo transportation.
For safety reasons, the locking laser does not affect endoskeletons.


Machinery such as tractor beams, mining lasers, and guns that are not required to be mobile, can be attached to a fixed mount.
For machinery that needs to be moveable, turntable versions of fixed mounts are avalable.

Mounted weapons are attached to spaceships or space stations via a device base. The available weapons are the autocannon, laser cannon, plasma thrower, rail cannon, missile, and torpedo.

A radio transmitter is a station only device, it's signals are detectable using navigation receivers. They are used in community navigation systems. 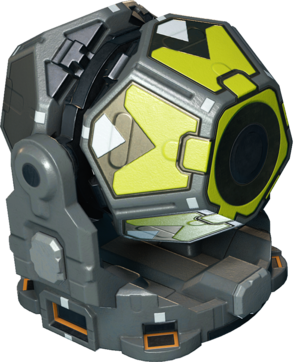 A navigation receiver is a device that can receive signals sent out by Radio transmitters. 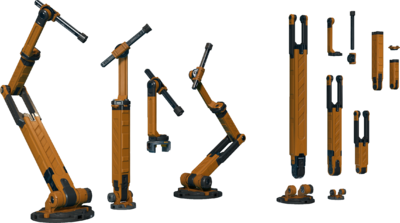 Robot arms are chain of hinges connected to a special turret joint body.
Robot arms have mostly the same functionality properties as hinges.
Robot arms are primarily used in factories for the operation of automated tools and factory lines.
Robot arms are also equipped adapters that allow the attachment of hardpoints into them to be used with turrets. 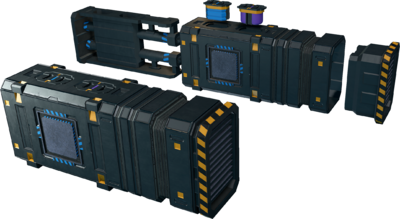 Thrusters are a mandatory part of spaceships in order for them to be able to fly. At least one thruster is required in each ship.

Turntables are mounted platforms for devices.
Machinery such as cannons and tractor beams can be mounted on top of the turntables. 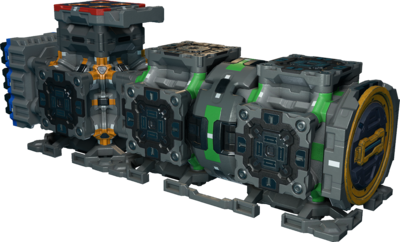 Generators are one of the most essential parts of any constructs that need generated power. Most spaceships for example need to have a properly assembled generator in order for the ships to function. 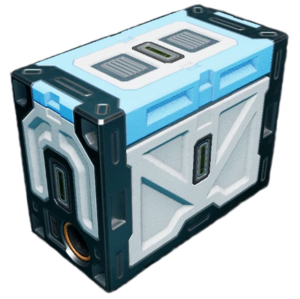 A battery holds 10 000 energy.
Batteries are modular - adjacent batteries connect to each other and can share a single power connection.
Smaller ships can run entirely on batteries, but most ships use them as a buffer to handle periods of higher energy use without wasting Generator output.
Batteries with energy stored inside explode when damaged. 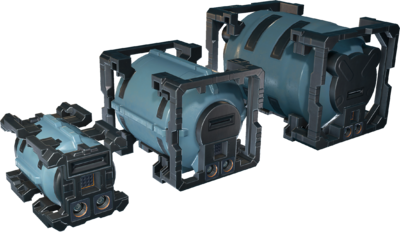 Propellant is the fuel for spaceship thrusters.
Propellant is usually contained in large, medium or small gas tanks.
For every tank size there also exists a support piece.
These canisters are often placed inside a space ship, and bolted down with supports to secure them.

Solar Panels are the main fuelless energy source in Starbase, and are also the best option for Station Power, where they are used on a large scale.

Universally there are two types of buttons that are commonly used; hybrid buttons and small buttons. Both have adjustable interaction styles.
Hybrid buttons are modular, and can connect to adjacent modular displays. Small buttons have their own cable port. 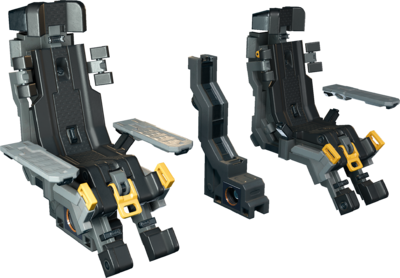 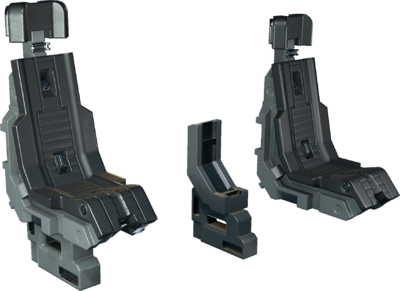 Chairs are a type of seat, usually equipped with four legs.
The known universe has a variety of chairs with different functions and designs, such as pilot chairs of spaceships or benches that can usually be found at space stations. 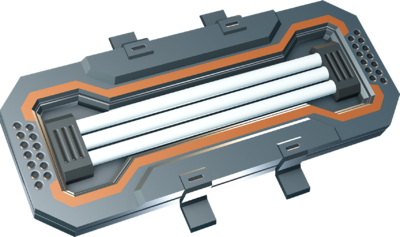 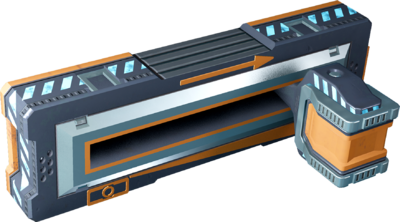 Levers are interactable devices used mainly for controlling devices and machinery.
Levers can also be used to change the value of fields between set minimum and maximum values.

The resource port allows the player to connect to, and interact with, the inventory of Modular ore cargo crates.

The resource bridge is used to connect a ship to a refuel station or to other ships, for refilling propellant tanks and batteries, and for connection to ore towers.

Conection to a resource bridge is necersary for the use of the mining backpack.

Modular displays are most commonly used in spaceship cockpits as information screens and they are considered vital for easy ship management.
Progress bars are generally configured to show progress from 0 to 100, whereas text panels are generally used to show text.
They can however be used to display whatever information needed.

Three different rail mover entities exist: basic, turntable, and jointed for machinery.
Rails can be used to create anything that moves on rails, like elevators, gun turrets, and factory lines.
The primary use for rails however is automation. 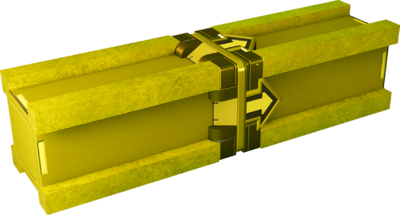 Rail sockets are used to power rail networks and to transmit power to any connected rail mover.

Rail triggers are attached to rails and used to control rail network behavior, either through YOLOL or directly by changing configured values.
Rail triggers detect rail movers passing by them. 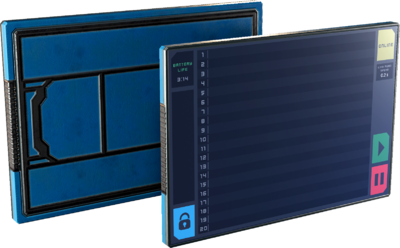 The YOLOL chip is a movable container for programmed scripts.
Scripts can be edited by the physical chip interface directly, or by using the universal tool.
The chip is usually placed in a reader, such as the chip socket or device rack. 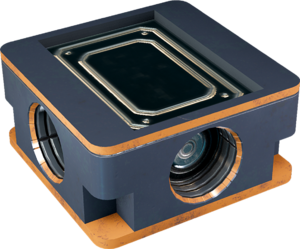 YOLOL chip socket is a base device, which relays power and connection to a data network for the YOLOL chip.
Other option for mounting YOLOL chips is the Modular device rack. 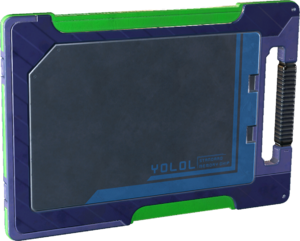 Modular device racks are a compact way to store multiple YOLOL chips and connect them together. They can make it easier to construct larger and more complicated YOLOL systems compared to using simple chip sockets.

Hinges are devices used for creating turning, sliding and opening mechanisms such as doors, hatches and sliding doors.

Cargo lock frame is formed of series of components, which when properly assembled, enable objects to remain static when placed inside it.
Due to this feature, cargo lock frames are optimal for transportation of cargo of any kind.
The cargo lock frame can be transported inside a spaceship, with a cargo beam, or even by hand.

A modular storage unit that stores ore and materials.

Crates can be stacked to form larger storage unit.

They share power, data and pipe network when stacked.

Crates are interacted with through a conection with a resource bridge. 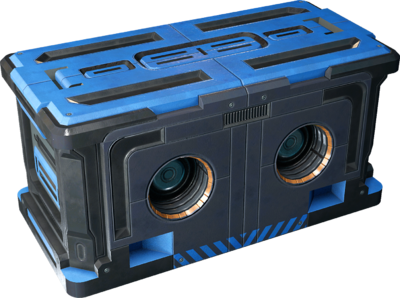 The Main flight computer combines information from several Flight control units (FCU's) and sends the necessary data to each thruster connected to it.
Due to this it is possible to use several FCU's within a single ship. 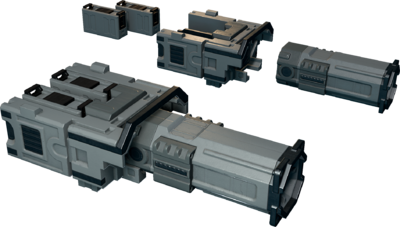 The mining laser applies continuous damage to the first object hit within its configured range, making it an efficient tool in professional mining, often used with ore collectors.
For example the mining ship Urchin is equipped with mining lasers.

The ore collector functions as an industrial version of the mining backpack, vacuuming up small ore chunks, it is often used along with mining lasers. 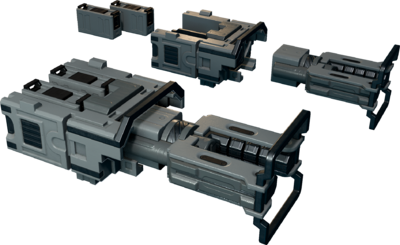 Tractor beams grab objects that their beams hit.
Tractor beams are most commonly found in cargo spaceships as they enable the transportation of heavy cargo.
The beam drags the attached object close to the tractor beam base, orientating the object according to the nozzle of the beam.

The network relay is a device used to separate a network within a ship or station into multiple partially separate sub-networks.
Separate sub-networks allow one-way broadcasting of variable changes between them, and enable the creation of modular YOLOL systems. 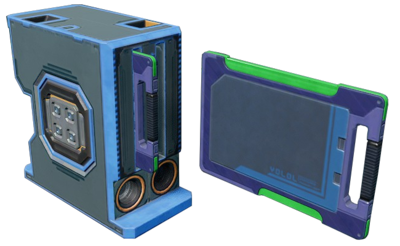 The memory relay is a device used to transfer a data fileds from one memory chip to another, allowing for data fields to be linked with different field names.
Memory relays separate sub-networks allowing for one-way broadcasting of variable changes, enabling the creation of modular YOLOL systems. 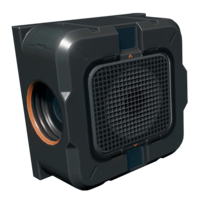 Used to add audio feedback to spaceship and station devices.

The Laser Designator is a device used primarily in combination with torpedos to guide them towards a target. 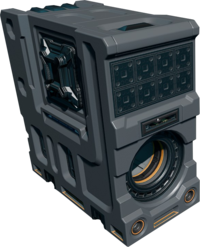 Used with station or ship blueprint chips to automate the building of a blueprint.

The reconstruction machine is used to make new Endoskeletons if they come to an untimely end.