As one of the largest known factions in the universe, Empire represents itself as an imperial meritocracy with a subdivided military and civilian government.
It is formally lead by Emperor Laurentius and various commanding officers.

The Empire represents itself in angular, pointed iconography and architecture with a pseudo-Roman naming convention for ships, stations and prominent endoskeletons.
Orange, white and purple are the official colors used by Imperial ships and stations. However, differences may exist as a result of rank, veteran status, or both.

As indicated in various trailers, the Empire is at war with the Kingdom, the other largest known faction in the universe.
Both Empire and Kingdom are run by players and developers. 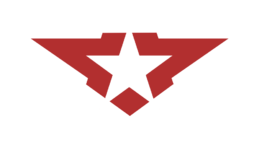 The Kingdom is one of the largest factions in the universe, ruled by King Joel the Just and the Assembly.
Kingdom is a mostly civilian faction focused on new player experience.
Their symbol is the crest of the royal house, which shows the Red Star Shield adorned with red wings. The crest is granted to important personnel and ships within the faction.
The Kingdom is currently at war with the Empire, the other largest faction in the universe.
Kingdom is the leader of the King's Banner alliance, which has the objective of giving military and economic support to the members.

Neutral is less of a faction and more of an umbrella term for every robot that is not a part or member of the conflict between the two largest factions, Empire and Kingdom.
As Neutral is not actually a faction, there is no single common leadership or government. Despite having an officially recognized symbol, few neutral robots unite under it, preferring symbols of their own clans, companies, and crews.


A list of player-made neutral factions can be found here.

Retrieved from "https://wiki.starbasegame.com/index.php?title=Factions&oldid=27365"
Category:
Cookies help us deliver our services. By using our services, you agree to our use of cookies.