As one of the largest known factions in the universe, Empire represents itself as an imperial meritocracy with a subdivided military and civilian government.
It is formally lead by Emperor Laurentius and various commanding officers.

The Empire represents itself in angular, pointed iconography and architecture with a pseudo-Roman naming convention for ships, stations and prominent endoskeletons.
Orange, white and purple are the official colors used by Imperial ships and stations. However, differences may exist as a result of rank, veteran status, or both.

As indicated in various trailers, the Empire is at war with the Kingdom, the other largest known faction in the universe.
Both Empire and Kingdom are run by players and developers.

Empire has been extremely active in pre-release diplomacy, founding the Imperial Embassy and Diplomatic Corps through which they interact with outside entities.

Ambassadors of the Empire are largely selected from military personnel, however may expand to include civilian personnel in the future.

Contracts issued by the Embassy include construction, infrastructure and design orders for companies looking to secure funding, and utilizes a multi-phase submission system.
These contracts are normally issued in a competitive manner, wherein competing companies put forward designs to meet specifications, and winners are selected by the relevant Imperial body.

For diplomatic enquiries, please use the Imperial Embassy Discord Server or contact the Head of Diplomacy directly.

First Regimental Combat Team "Vanguards"
The First Regimental Combat Team, abbreviated [1stRCT] and colloquially known as the "Vanguard", is the first authorized Imperial Regiment by Emperor Laurentius.
It serves as a training and conditioning regiment for new members of the Empire and offers positions to veteran officers to impart their wisdom upon new generations of Imperial soldiers.
It was founded by VilleFB and Vampiricdust.

The Vanguard is subdivided into three combat and one support battalion:


It has four auxiliary companies known as:

Soldiers of the Empire are given different ranks based on their performance, service time, and military branch. 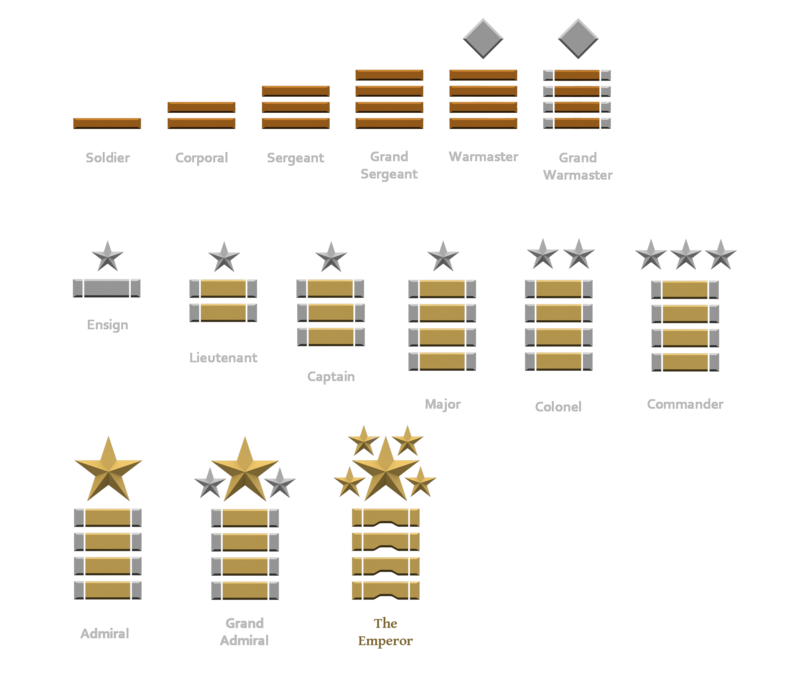 Retrieved from "https://wiki.starbasegame.com/index.php?title=Empire&oldid=29649"
Category:
Cookies help us deliver our services. By using our services, you agree to our use of cookies.