Some helpful resources on research on the asteroid belts can be found here:

Feature Video: Scale of the Universe

Asteroids come in various sizes, containing an exterior shell and an interior core that are both made up of usable materials. Asteroids can be broken apart and mined on-site, or hauled entirely to a station for refinement.

The following are the current asteroid shapes found in the galaxy. Sizes have slightly changed since the creating of this visualization:

!
This page contains outdated content and needs to be updated.

Moons listed below were discovered in closed alpha, and will be changed for early access release. The map shown below depicts concept art and not any arrangement of moons that was present in either the closed alpha or the early access.

Eos has fifteen moons, the closest being around 20000km (55 hours at 100 m/s , 37 hours at 150m/s) from the asteroid belt. The largest moon is thought to be 1000km in diameter. Planned features such as player built stations, mining lunar rocks, and warp gates will turn moons into important hubs in future updates. 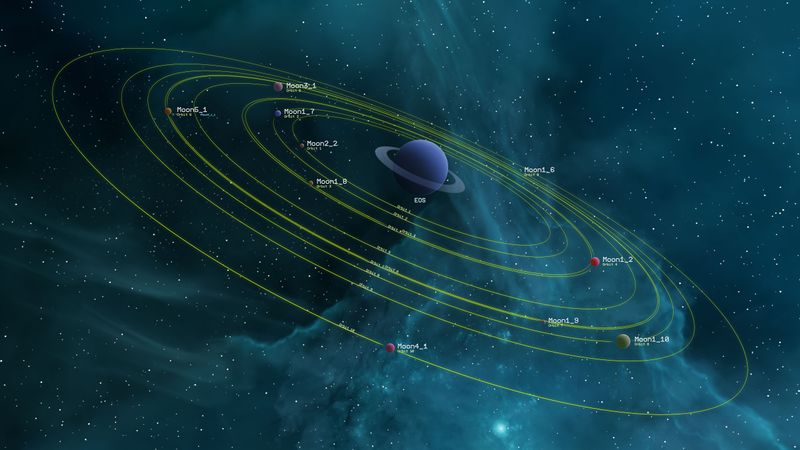 A flat, gray moon dotted with many mountains. It is believed to be the closest moon to the home station at about 20,000 km, and was the first to be explored. It's exact size and distance is unknown. It has since been given a green atmosphere, and is currently the only moon with city structures and a warp gate. Ships approaching the lunar surface should be built to withstand gravity.

A grey moon covered with valleys and hills. It is believed to be either the second or third closest moon to the home station at about 34345 km, and was the second to be explored. Its diameter is about 236.6 km[1].

First explored during the Closed Alpha on the 23rd of June, 2020, by Some1Gee. The voyage took 63 hours, and covered an estimated distance of 34,345 km. Some1Gee safely landed his ship, dubbed Snoopy 2 named after the real life Lunar Excursion Module of Apollo 10 that was fired off into interplanetary space after completing it's mission. Some1gee planted a flag and explored Artemis, naming the crater he landed in Endeavor Crater. This marked the first time a moon other than Elysium was reached.

Revenite is a grey moon first explored during the Closed Alpha phase of Starbase on March 20th, 2021 by Cashmere Captain [NVΛ]. It is believed to be about 34560km from the Elysium warp gate and to be the third moon to ever be explored.

(Getrak): This moon took me 8 days to go there and around 60 000Km. The planet looks like lava far away but it's finally all ground and rock-like flower. The atmosphere of this Moon is green and could be the moon where we may extract the gas in the future update (hypothesize). The satellite close to this one is a full rock with something like snow. Discovered by Aldianna

Retrieved from "https://wiki.starbasegame.com/index.php?title=Space&oldid=29579"
Cookies help us deliver our services. By using our services, you agree to our use of cookies.