Official page: This page is maintained by Frozenbyte, the developers of Starbase, and cannot be edited by users. Information on this page has been confirmed to be correct at the time of writing (please get in touch if you notice anything odd or outdated).

Follow your manufacturer's official instructions. However, if you believe the uninstallation was unsuccessful, there may sometimes be a need to do a full driver uninstall, and you may want to use a 3rd party tool such as Display Driver Uninstaller (DDU) by Wagnardsoft. Please note any such tools are not in any way endorsed by us and you use them at your own risk.

Starbase has an automatic crash dump tool that submits crash dumps to the developers whenever they happen. However sometimes the game may crash or freeze in a way that does not invoke the tool. In this case, as a last resort or if asked by developers, you can force a crash dump manually by opening the Task Manager, right-clicking the process (i.e. starbase.exe) and selecting "Create dump file" from the context menu. This may take a few minutes and the resulting file may be large (many gigabytes). (To open the Task Manager, either search "Task Manager" in the Search bar or press Ctrl+Alt+Del and choose Task Manager.)

If you are asked to deliver the dump to the developers, go to the folder where the dump was created and zip it with your favorite zip program (we are ok with .zip and .7z). If you have a means to upload the file, please do so, otherwise ask for developer guidance.

In April 2021 we became aware of a graphics driver issue that manifested itself in many different situations, most prominently in the "Demolition job" tutorial when a Vasama Vanette ship was spawned. The issue affected at least the 16XX and 20XX series of GPUs from NVIDIA, and possibly the 30XX series as well. Upon crash, a "GPU error detected" message such as this would appear: 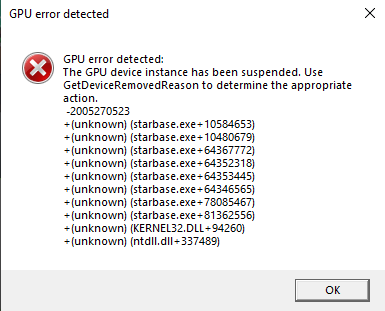 The workaround for the affected GPUs was to use older drivers such as 461.92 or the Studio drivers 462.31. The issue was most likely introduced in drivers 465.89 onwards. Other vendors' GPUs were unaffected.
NVIDIA released fixed drivers 466.47 on May 18, 2021 which can be downloaded on their website. The issue should be solved with new drivers (if it persists, there may have been a problem in updating the drivers, and a full uninstall of the graphics drivers may be required).

Install not available in Steam

In rare occasions, it's possible that Steam doesn't allow installing Starbase. You may also get an error "Starbase is not available on your platform", eventhough you are running Windows.

Unfortunately these issues mean that you are most likely running a 32-bit version of Windows, and Starbase requires 64-bit. You would have to reinstall Windows as 64-bit. Generally speaking support for 32-bit operating systems is fading away, and supporting them takes additional development work - we have decided against that, as the vast majority of users (99%+) are running 64-bit already. You can look at the Steam Hardware Survey for the latest data.

See an exemplary screenshot of the Steam client's game area below. 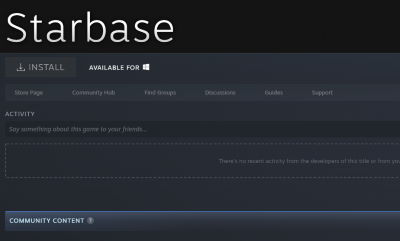