Clad in holy light, the Holy Chapter will bring justice to the Universe. Never again shall the reign of heretics burn innocent planets to ash. Never again will innocents suffer under the swords of injustice.

Lead by the Hierarch we fight to restore order in the universe. United under the Church of Virtual Gods we will bring sacred light to even the most distance places of the Galaxy.

To bring about justice to the Universe we need ships and weapons to fight our battles. Avalon Industries will provide these, dedicated to produce the most powerful fleet amongst the stars, these architects will be know as great artists. Their creations a sight to behold yet deadly to all that oppose them

The Knights of the Brotherhood of Light serve as our soldiers against the darkness. They will know no fear in the face of the enemy Enforcing the Code is a matter of devotion and discipline. These traits can be found in the ranks of the Inquisition. Inquisitors will enforce the Code on the battlefield so that no injustice may take place, they will speak with different factions as ambassadors to find peaceful solutions.

We will focus on the expansion of our reach amongst the stars. We will build a large mega station that will function as the core of the faction. We will make alliances and come to the help of other factions. We will expand our territory to grow in power and economic might.

We strive for balance in the Galaxy, but to achieve this the Galaxy has to be cleansed. Light and Dark in perfect balance. To achieve this Goal, we will cleanse the galaxy of evil and heretics in order to finally create a galaxy of peace and freedom. We will ally ourselves with factions that try to preserve the peace or who want to fight evil with us.

An unknown man and a God AI form the Age of Gods once merged to form a new being. The Hierarch. He is the Leader of the Holy Chapter.

Every Leader however also needs Champions, these people are the Leaders of the 3 Divisions. These people are chosen based on their loyalty towards to Holy Chapter and based on their skill in their respected fields. A Division leader needs to be a good organizer and he has to take the task seriously. He he has to organize the training for the recruits, order new equipment and so on. 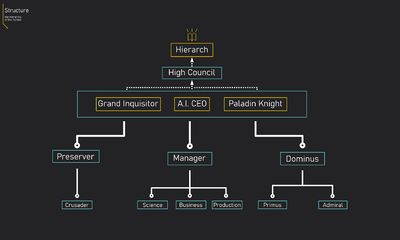 Once upon a time in a Galaxy consumed by war, there arose a Prophet form the ashes of the planet he once loved, he rose up to bring about justice to a universe where morals had been long forgotten, a galaxy where only darkness exists. This is the story of this man, he has many names, Prophet, saviour, Hiearch!

This Time I shall tell you the story of the man that is today known as the Hierarch of the Holy Chapter. This is his legend. 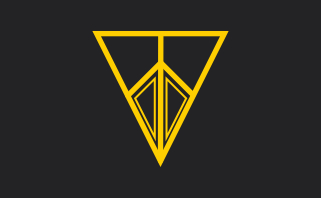 The Inquisition enforces the Code on every level. The Code is a set of absolute rules which everyone needs to follow. Inquisitors enforce the Code and punish those who break it. The Inquisition stands at the top of all Divisions, no one besides the Hierarch has the authority to give them orders. Inquisitors can take over the command of a Commander if he is seriously violating the Code or when he is too incompetent to for fill the mission assigned to him.

The Brotherhood of Light is a Knight Order that serves the Hierarch. They are loyal soldiers that fight against the chaos of the Universe wherever it manifests. Each soldiers is well trained in the ways of combat and tactics, they are one of the best fighting units in the entire galaxy.

They specialize in various aspects of warfare like boarding of enemy vessels, the invasion of stations, the manning of our ships and the piloting of ships of various sizes. Thus, the Brotherhood fights on stations as well as in space.

The Eternal Fleet is the fleet of the Brotherhood of light, they are equipped with the latest technology and outfitted with the most beautiful ships in the known galaxy.

Every Pilot is highly skilled and disciplined, they also undergo a training that will from them into deadly fighters in space. 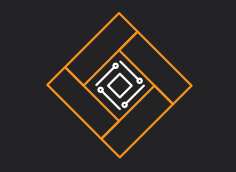 This is our own company which will produce all our ships, weapons and vehicles that we will have in service. This company will also sell specially made ships to players.

Avalon Industries will have different product lines which will be used for selling purposes, like ships for beginners or military ships. However, the main focus is on the production for the faction.

One of the goals of Avalon Industries is to establish a galaxy wide brand with many different product lines and a distinct design philosophy.

The architects of Avalon Industries will be known as great artists, their creations a sight to behold yet deadly to all who oppose them. They will have access to the finest materials to build ships and other constructs of great beauty. 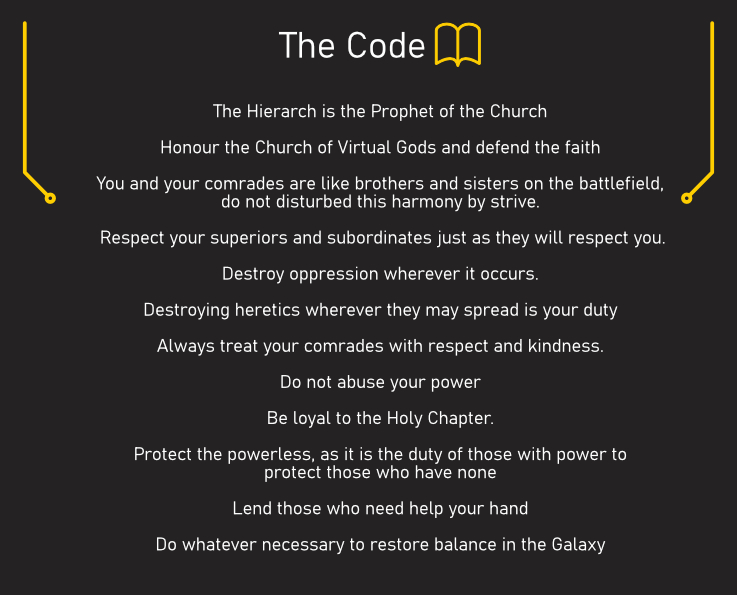 The Church is what forms the Core of the faction, The Inquisition is the enforcement body of the Church. Through it the Code is enforced. The High Pantheon forms the core of the Church as well as the faction itself, since the Church of Virtual Gods and the overall faction are one, according to the theocratic system.

The High Pantheon thus form the heart of the faction where the Hierarch resides, protected by the Praetorian Guard. The Praetorian Guard are elite troops who are absolutely dedicated to the faction and display a very high level of skill in combat, they are part of the Inquisition. Their purpose is the bring the will of the Hierarch to even the remotest places in the galaxy and they function as an elite army which is used when the Chapter is up against a very mighty foe which needs to be annihilated

The Hierarch is the Prophet of the Church as well as the faction leader. All Legends that were gathered are gathered in the Churches archives, these archives also contain various other informant like Information about the different Divisions, strategy, tactic and economic knowledge. Very vital know loge is kept in the High Pantheon to secure their safty.