Arcforge Industries is a pirate outfit running with a corporate front, similar to the fabled mobs of yesteryear. Arcforge doesn't have a particular political or economical goal beyond generating profit for itself by disrupting local economies and taking by force the effects and materials of others.

While Arcforge may primarily be a pirate group, nevertheless its corporate offerings will attract people of higher moral standing and ethical mindset. Therefore, its corporate design is around fulfilling the desires and needs of its employees and members, rather than generating gross and obscene profits for the goons at the top. To this end, all corporate generated profits not directed to fueling its pirate operations will be reinvested into the corporate structure to expand operations, increase fleet size, and acquire other tools and assets to reward and equip its members. Corporate profits will not be shamelessly funneled into the pockets of a board of shareholders or to pad the wallets of leaders and founders.

In its pirate operations, Arcforge will seek to be neutral and unpolitical in its targets, but restraint will be exercised towards small outfits, groups, and single individuals. Rather, its efforts will be put into staging heists, thefts, and other disruptions on larger groups so as not to disproportionately affect those whose livelihood depends on that next shipment of ore; but rather to upset the larger operations and keep larger outfits on edge.

Its corporate offerings will be tailored to supply the needs of the larger workforce and economical trade that occurs between player groups and stations. Such offerings include mercenary offerings for protection or hits, trading, and logistics such as hauling, escort, and fleet management. Each corporate wing of operations will be housed inside a Core which will be partially self-sufficient and controlled. These Cores will run off of member feedback and have elections of ranking members to positions of authority.

Ultimately, Arcforge seeks to present itself as the go-to corporation for both new and veteran players, either to join and partake in its history or to deal and trade together. It will accomplish this by offering lucrative positions that competitors will be unable to compete with due to the power of profits being returned to the players instead of fueling a corporate vision.

Arcforge Industries is a Member's First™ Corporation, meaning that the needs and desires of the Members come before anything else, and their feedback and goals will shape the future of the Company and each Core. They will have many options for leaving feedback and suggestions and Ranking Members will be in charge of channeling and fueling this feedback into results-based solutions that address their concerns and effectuate change that accommodates the group and propels the Company to success. As the Company's success and profits are shared between Members, their success and the Company's success will be one and the same, and they won't feel like their hard work goes to the pockets of a few at the top. Instead, it will power their future. Groups will also be held accountable to ensure that they are working towards their goals in a timely manner without undue waste of resources to ensure that no group or Core is deliberately dragging down the others. 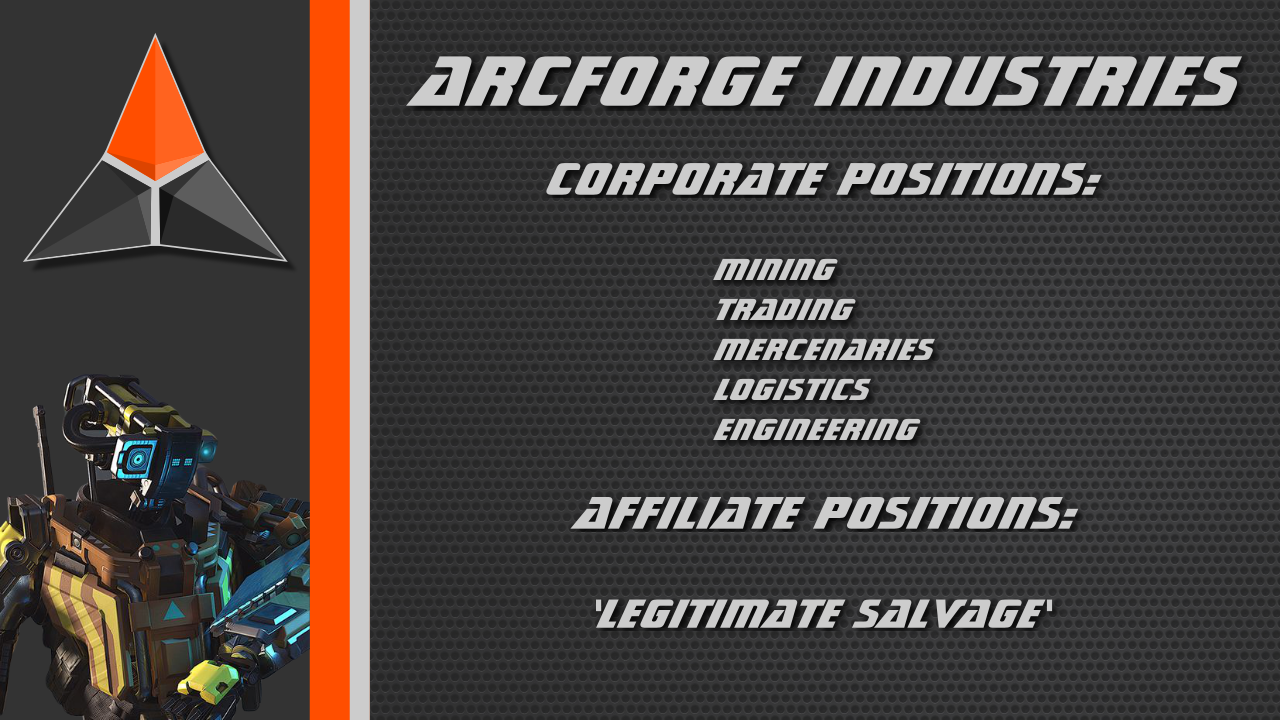 Arcforge's primary goals are twofold: become the primary, go-to new player faction, either for protection and contract jobs, or to enlist and join up directly. This goal will be achieved by being incredibly generous to the new player community and offering incredibly lucrative options, such as free training, limited-scope operation of company equipment at no charge, and options for company insurance at reduced rates. By doing so, Arcforge will ensure that there isn't an egregious economic inequality between large corporations and small groups and new players. It will also provide a safe haven for new players and small groups to rally around without fear of retaliation or griefing/pirate activity centered on them.

The other goal is to generate economic uncertainty, instability, and increased operating costs for large players in the field, using strategic strikes, disruptions, and piracy to force or push companies into specific paths so that Arcforge can profit off of these instabilities.

For further reading on the operations and structure of Arcforge Industries, check the Charter of Operations found here.

How are members rewarded?

There will be two options that will be explored, informed, tested, and fully fleshed out for member payouts/rewards. The first is a form of corporate socialism, where the company will take the income generated by its members to supply all of their needs, be it ships, tools, or weapons. The command structure of each group outlined in the Charter will be responsible for ensuring the fair and proper distribution of supplies to ensure that each group has access to the items needed to complete their goals. This ensures that each group can fulfill their dreams and desires without excess fear of loss or damage incurred.

The other method will be on a contract basis, where a group will form up and request a job to be completed. This group may bring their own equipment or borrow the company's equipment to do so. At the completion of the job, a cut will be taken from the haul or income made to cover the operating expenses, overhead, and logistics of supplying jobs on a contract basis, as well as any potential rental fees for equipment and damages. Contractors who accurately report their haul, do not incur damage, and complete their jobs in a timely manner will receive additional rewards, such as significant reductions in company insurance, a greater portion of their funds being retained for themselves, and their pick of available jobs before other contractors.

A potential third option of standard wages paid may be considered on a case by case basis or rendered after the payout structures are tested. It is expected that most players who aren't part of any other group or even groups of friends will desire to be Members of the company, whereas small groups who seek independence and internal freedom but also want the benefits of being protected and share common goals will go the route of contract work.

Term-based rewards for rank and time in the Company will also be considered as well.

You can join the Community Discord here to ask further questions, request to join, or for any other items relating to Arcforge Industries. As it is a Community Discord, there are several sections of the server. Upon arrival, simply head to the #about section and click on the reactions below a segment to be auto-assigned a role.