For designing and building/assembling spaceships, check out these guides:

See the Community Ships page for a gallery of community created ships.

For a list of all player ship shops and the available ships in them, check the Ship Shops page.

See Ship modifications page for tips and tricks for modifying spaceships (including community ones).

The Hedron is a small and nimble civilian craft. It comes with automatic landing helpers which makes the ship suitable for use by inexperienced pilots or simply for those who prefer to own one for luxury purposes.
One of the things that makes the Hedron so special is it's advanced station targeting system which allows the craft to move to stations without pilot control.
A Hedron has a low flight time, so storing some spare fuel in the ship is generally considered good practice with the craft.
Given its limitations, these ships are not suitable for warfare or battles. Its primary design is to serve as ships for the civilian populace and for news reporters eager to grab a story.

The Ithaca is a class of medium-tonnage civilian transport ships, with ample space on-board for user modification. Though unarmed and relatively unarmored, the Ithaca-class are capable of withstanding an appreciable amount of damage thanks to overlapping hull segments.

The Kodiak is an unarmed civilian spaceship that was built with Endoskeleton enjoyment in mind. Two of its seats are faced towards open windows, a luxury compared to those found on other ships.
The Kodiak can be modified and customized with extra features, just like most ships that are currently purchasable in the universe.

The Mason is a construction ship designed to haul heavy loads of different materials.
This ship is commonly used when an Endoskeleton cannot carry cargo by themselves. Instead, it relies on its cargo space to carry cargo with ease. 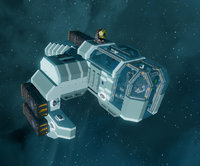 The Nautilus is a traditional cargo ship originally build as a combat ship. It was later re-modeled into its current role as a hauler.
The Nautilus, like all other cargo ships, are equipped with cargo beams, enabling it to transport heavy objects.

The Ocelot is one of the first personnel transportation ships ever created in the galaxy.
Although having a long history, it is reliable in terms of flight time.

The Peon is a small ship used in multiple lines of work.
Peons are equipped with tractor beams, which can be used to transport asteroids and salvage.

The Pincer is an asteroid collector ship equipped with cargo lock beams and a tractor beam.
Using advanced YOLOL technologies, Pincers can enter power saving mode automatically, allowing for a pilot to focus on other more important tasks.

The Pioneer is an unarmed, versatile spaceship with autopiloting YOLOL configurations.
Pioneers are equipped with radio transmitters and a large set of programmed chips, making them appropriate ships for patrol duties.
Navigational technology were first tested on Pioneers.

The Remus is a cargo ship designed specifically for transportation and hauling of large objects such as station parts or asteroids.
The ship utilises cargo beams to transport cargo assigned to their pilots.
It is the brother ship of the cargo ship Romulus.

The Romulus is a cargo ship made specifically for transportation and hauling of large objects, such as station parts or asteroids.
Unlike its brother ship, Remus, the Romulus is loaded from the top side of the ship, allowing for easier loading and unloading of cargo.
It is equipped with cargo beams for transporting large objects and it is also generally considered to be easier to pilot than the Remus.

The Serf is a basic, minimalistic shuttle.
It's emphasis for role over looks makes it suitable for travelling short distances.

The Twin Vasama is a small ship that is powered by a battery. Unlike its original counterpart, it is equipped with two seats and can fit two robots in it.
Compared to the original Vasama, the Twin Vasama has a hover mode and generally better mobility.

The Urchin is a hybrid between a cargo and mining ship.
It is equipped with powerful mining lasers, enabling it to mine minerals effciently.
The Urchin also has a cargo lock frame that can be used to transport cargo.

The Vasama is a very small spaceship that is powered only by batteries.

Vasamas are generally used to get around the massive Capital Mega Station as an alternative to walking.

The Vasama Vanette is a small delivery and cargo ship equipped with a cargo hold.
It contains both a Flight control unit and a Main flight computer, unlike its original counterpart Vasama and its brother ship Twin Vasama.

The Vector is an economic spaceship optimized for long flight times.
The ship is a good choice as a first ship due to its relatively low cost and long flight range.

Wing is a former military ship that was modified to be a licensed civilian ship.
It can, however, be rearmed with weaponry to fight other ships.

The Zilant is a small and fast ship built for racing.

The Hoplon is an Empire Tournament fighter used in the BoltCrackers PvP Tournament.
It was designed by Quasar Systems under secret and deployed against Collective as a surprise release.
The Hoplon is one of few ships to use Empire's Closed Alpha coloration of Red and White.

Empire Lictors are heavyweight gunships, designed for upkeeping order.
Due to their slow speed, Lictors are usually paired with fighter escorts, consisting usually of Spathas.

The Empire Sagittarius is a long range force projection corvette.
It boasts and extremely durable design, being able to continue fighting even after losing more than half of the ship.

Spathas are nimble and effective fighters used by the Empire's forces.
Spathas are often used to escort larger gunships and frigates such as the Lictors and Centurio.

The Taurus is an Empire corvette used in the BoltCrackers Tournament and various training exercises.
It was designed by Quasar Systems, features a highly robust structure and excellently detailed interior work.

The Valkyrie is a general-purpose space superiority fighter.
Valkyries are often used on short range patrols and escort missions for larger ships, like the Lictor or Centurio.

The Veles is conceptualised as a Torpedo Corvette that can fill the roles of an anti-gunship and anti-frigate ship.

Knights are armed fighters, used by the Kingdom troops to support heavier gunships, such as the Lancer.
The Kingdom Knights can be equipped with different load-outs due to their modular building design, allowing for a variety of customization.

Retrieved from "https://wiki.starbasegame.com/index.php?title=Spaceships&oldid=27688"
Categories:
Cookies help us deliver our services. By using our services, you agree to our use of cookies.